My second story choice was a no-brainer from the beginning: The People of the Black Circle, from September-October 1934 Weird Tales, is the first Robert E. Howard story I ever read, forty years ago, when I first bought a copy of the Italian translation of Conan the Adventurer.
So, my first meeting with Conan, and the story that sold me on the character, the world, and the author.

This novella-length story is probably Howard’s most accomplished in terms of pure plotting and writing. It features a wide cast, a large number of moving pieces, and the plot has been compared to an Elizabethan drama by none else than Fritz Leiber (a writer that knew something about Elizabethan dramas).

Inspired by the adventure/intrigue stories of Talbot Mundy, The People of the Black Circle is set on the mountain-rimmed border of Vendya – the Hyborian equivalent of Mughal India, and it opens with an impressive set piece about the agony of emperor Bunda Chand, whose soul is being tormented by an evil sorcerer. The sorcerer Khemsa, a servant of the Black Seers, worked his dark arts on Bunda Chand on orders from Kerim Shah, a Turanian spy. Such is the torment the emperor is suffering, that he asks his sister Yasmina to release him by killing him.

The king of Vendhya was dying. Through the hot, stifling night the temple gongs boomed and the conchs roared. Their clamor was a faint echo in the gold-domed chamber where Bunda Chand struggled on the velvet-cushioned dais. Beads of sweat glistened on his dark skin; his fingers twisted the gold-worked fabric beneath him. He was young; no spear had touched him, no poison lurked in his wine. But his veins stood out like blue cords on his temples, and his eyes dilated with the nearness of death. Trembling slave-girls knelt at the foot of the dais, and leaning down to him, watching him with passionate intensity, was his sister, the Devi Yasmina. With her was the wazam, a noble grown old in the royal court.

The People of the Black Circle, chapter 1

This theme of death as a release we already found in The Tower of the Elephant, and acquires a darker meaning if we consider that, at this point, the author’s self-inflicted death is about two years away.

Yasmina now wants to find those that caused her brother’s death, and travels to the border to seek the collaboration of a bandit king who’s said to be quite effective in achieving results: Conan the Cimmerian. The local governor has seven of Conan’s men in prison, and hopes to reach some sort of agreement with the barbarian. But when things precipitate, Conan makes a grab for Yasmina, and with the girl on his shoulder, makes for the hills.

Here things get complicated – Conan is simply trying to get back to his men, but is attacked and captured by a not-necesarily-friendly tribe, that refrain from killing him simply because in the past he saved the life of their chieftain. On the Cimmerian’s tracks are the Turanian spy – that wants to get a hold on Yasmina; the Vendyan army – that want to recover their princess; and Khemsa and his lover, who have decided to ditch the Black Seers and go solo, using captive Yasmina as a pawn in their bid for power and riches.

Nothing goes according to plan: Khemsa kills Conan’s friend, and incites the tribesmen to kill the Cimmerian; Conan and Yasmina escape, Yimsha hot on their heels, but are intercepted by the Black Seers, that kill Khemsa’s girfriend, cast the sorcerer in a ravine, and steal Yasmina. With his dying breath, Khemsa provides Conan with the information and equipment he needs to get into the citadel of the Seers, and Conan goes on, with the Turanian spy Kerim Shah in tow, because after all the enemy of my enemy is my friend.

Conan faces the Seers and makes short thrift of them – and of Kerim Shah, two-faced backstabber that he is.
All’s well?
Not exactly – because now Yasmina’s troops from Vendia find themselves faced with the Turanian cavalry, and the battle is decided when Conan’s raiders join the fight on Yasmina’s side.

Whew, that was complicated!

But you never feel lost or confused, reading this story – the prose is crisp, the descriptions are impressive and just right, and the characters are absolutely perfect. Yasmina is not just another pretty face, and Khemsa is probably the best bad guy in the whole series.

A sorcerer in the service of more powerful sorcerers, Khemsa is motivated by very mundane needs, exemplified by his lover, who is as greedy, amoral and ruthless as he is. Khemsa does not dream of world domination, but just of acquiring enough wealth and power to enjoy the good life with his girlfriend.
Yet, he is the sort of guy that can dismissively order an hypnotized man to kill himself, and that at death’s door manages to turn Conan into the weapon of his revenge.
That’s some first-class evil, but elegant.

“I have no more use for you. Kill yourself!”

The People of the Black Circle, chapter 3

The story is very tight, with no filler, and yet there is so much going on that it turns out to be one of the longest in Conan’s canon – and one of the best sales in Howard’s career, getting him 250$ (that would be over 2000$ in today money).
It features an interesting mix of action, intrigue, gruesome sorcery and exoticism, and would make for a great movie – but of course we’ll never get one.

The link at the top of this post leads to the Wiki Commons text of Howard’s novella. For those interested, online scans of the three issues of Weird Tales that featured The People of the Black Circle are found in the Internet Archive

And here is an audiobook version for those of you that would rather listen than read this excellent story.

4 thoughts on “The Conan Re-read 3: The People of the Black Circle” 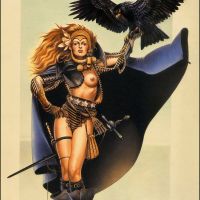