Yesterday, taking a pause from my writing to enjoy a serving of chocolate cake, I watched one of the worst movies I ever saw.
And I saw plenty of bad movies.

The thing is called Sax Rohmer’s Sumuru, it was shot in 2003 and it goes more or lesslike this…

If you are perplexed, so was I.
And if you are not, let me bring you up to speed… 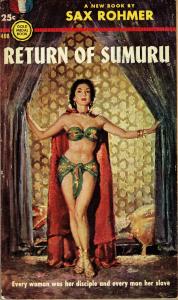 Sax Rohmer author of the classic Yellow Peril novels featuring Fu Manchu, in the late forties created the character of Sunuru, a femme fatale/dragon lady hell bent on world domination and male enslavement.
If Fu Manchu had been a menace to the Empire, in post-colonial times Sumuru was menacing male identity, using the same methods and strategies (and plots) of her yellow Peril ancestor.
Nice and smooth.
The character was first featured in a radio show, and startying in 1950, Rohmer also wrote a series of novels.
The titles are worth mentioning…

From the novels were also made two movies, featuring Shirley Eaton (she that had been gold-plated in Goldfinger) as the exotic villainess.

This was basic exploitative espionage fare, the movies throwing in a little bit of Bond and Euroespionage, while the movies stuck to their sensationalist, lurid “pulp” themes.
Fun, if a little repetitive after a while.

So what’s a starship got to do with the whole thing?
Well, basically, the screenwriters decided that the standard Rohmer plot of a lone resourceful man versus the evil queen and her minions would work better as a planetary romance.

And, this being Karavansara, we are always partial to a good planetary romance, and we’re fine with Rohmer. But…

First, this is a very low budget production, featuring CGI effects that look like they were ripped off a 1990s video game (that giant snake!) and action scenes that look stilted and silly. 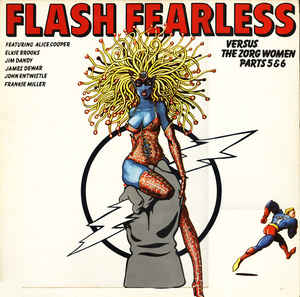 Second, the basic premise, of a planet under the (high?) heel of a matriarchy, where all men are enslaved, it’s been done so many times in TV shows and movies and even as a Flash Gordon spoof concept album featuring John Entwistle, Elkie Brooks and Alice Cooper (I kid you not), that trite is the word.

The end result is an ultra-cheap production of a done-to-death story.
Boredom ensues.

I read somewhere the cast had a ball shooting the movie – it would have probably been funnier watch footage of then having a good time than the actual movie.
But OK, let’s file this as a learning experience.