A friend mentioned March or Die yesterday – the movie, not the Motorhead LP – and we got talking about Foreign Legion stories – being both well convinced that neither of us would survive one hour in the Legion, and yet both victims to the Legion’s mistique.

(alas, the trailer is not up to the quality of the movie itself – pity)

And so I went and watched March or Die, also known as La Bandera, a movie I had not seen in quite a while, and that surprised me for a number of reasons.

The plot in a word: the survivors of a French Foreign Legion unit, fresh from the trenches of the Great War are sent back into the Moroccan desert, to escort a team of French archaeologists looking for a lost city.
The local tribes consider the area of excavation sacred.
A violent confrontation ensues.

A good adventure yarn, the movie plays all the pulp adventure cards in the deck:

And yet – and here comes the first surprise – it plays all its pulpy cards with a straight face and with an underlying sense of drama that makes this both a great adventure and a crepuscular movie about the damages of war. The long shadow of the Great War haunts the movie, and is part of the ingredients that make it so successful.
Also, the movie avoids or defuses many of the classic clichés – there are no psychos and sadist officers tormenting the troops, there is no evil natives, there is very little in terms of romanticization of war. 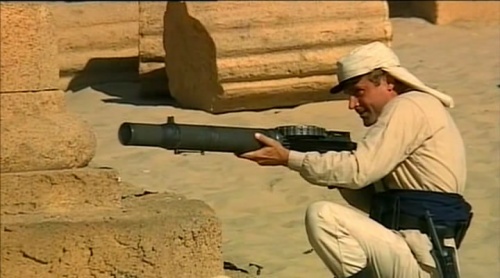 Also surprising, of course, is the cast, that is almost perfect.
The talent involved in the production (by Sir Lew Grade and – another surprise – Jerry Bruckheimer) is reason enough to check out the film.
Terence Hill, an actor unjustly more famous for his stunts than for his acting, shows he’s got his chops, and the rest of the cast is simply stellar.
Gene Hackman – who hurt himself badly during the shooting – Deneuve and Von Sydow are capable of making even a cheap potboiler look like a winner, and this movie was already a winner from the world go.
And Ian Holm’s character, El Krim, is based on an actual Berber chieftain that caused no end of trouble for the French in the first half of the 20th century. A nice touch.

The movie features a number of set pieces – starting with the title sequence in which the Legionnaires get back from the front and parade in front of a stunned audience of civilians.
Shot in Spain doubling for Morocco, the movie has some great production values, and exists – I found out – in two version, a longer one that was broadcast on the TV, and a shorter one, with a different finale, that was shown in theaters.

Both can be found on Youtube in an acceptable copy, and both are worth watching.
The movie starts slow but as soon as the action picks up, it’s a great, nostalgic rollercoaster of courage under fire and high drama.
Absolutely to be seen.