And so here it is, ready to be posted to my Patrons.

The Waterfall’s Wife is a story based on a snippet I caught in a documentary a few days back, about a couple of waterfalls, in Japan, that are married according to Shinto tradition.
Nice idea for a story, I thought.
Something different, not the usual orcs in the caves sort of story.

Halfway along the valley, on the northern side, a small groups of houses hung to the rocks of the lower bastions of the Abode of the Snows. Once, at the time of the last war, a stream had fed the small village, but in recent years the water had dried up, and the inhabitants had packed their things and moved, with their children, their dogs and their yaks, to look for a better place.
The houses had remained deserted, with leaking roofs and empty socket eye windows, a handful of small sheds huddled around a rickety wooden bridge crossing a dry stream. Ghosts and goblins haunted the narrow alleys and the overgrown gardens, or so the old women said down by Sikander’s Bridge.
It was in one of these houses that Diushi Leng, that is Diushi the Lame, had decided to stay for the long winter. And so he had made a broom of a bunch of grasses, and had cleaned the floor, and then he had built a fire in the hearth, scaring the owls away from the chimney with the aromatic smoke of certain weeds he had collected along the road.
The smoke rising from the chimney had brought men to check whatever was happening, and Diushi had offered them tea and conversation, because he had little else to offer.
But soon, as the days shortened and he first snow drifts rolled down the sides of the mountains on the cold winds of winter, the news had spread that the strange hermit could cure a sprained ankle or a bruise, knew herbs and plants and was willing to work in exchange for provisions and supplies.
“The man would not touch money,” one of the women said to doctor Paraminder Rao, as she delivered the laundry and the weekly gossip, “but he will take food, drink, or old furniture.”
“It is not unheard of,” the doctor had replied, puffing on his pipe. “Some among the people of the Middle Kingdom think that touching money will push them farther from virtue.”
“A belief we do not share,” the woman had replied, eyeing the doctor’s silken house gown, and she had extended a hand, to have her services paid.

My Patrons in the Five Bucks Brigade will get the pdf of the story, both in English and in Italian, in the next 24 hours.
It’s good to be my Patrons.

2 thoughts on “The Waterfall’s Wife, a preview” 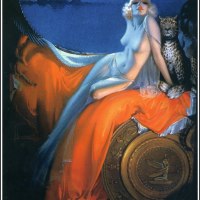