Sometimes words are complicated.
For instance, I had a hoot reading Varla of Valkarth by Glen M. Usher and Steve Lines, published by Rainfall Books.
It’s a fun story – the first in a series – set in Lemuria, and directly referencing, from the cover on, the old stories about Thongor, Lin carter’s barbarian swordsman.
The old Thongor stories were not highly sophisticated, but were fast, furious and fun, and Varla of Valkarth follows in Thongor’s footsteps: it’s good unsophisticated fun.
And I realize that unsophisticated sounds like a negative word, but really it is not – not in this case, at least

Varla’s adventure is a fine heroic fantasy romp,with all the right things in the right place – an exotic world, unexpected dangers, magic, gods interfering in the lives of men, more than a hint at a deep past, lots of action, unreliable good guys and slimy bad guys.
Banned from her tribe – welll, self-banned, as her tribe was more along the kill her! lines, Varla moves south of her mountains, and visits a number of Lemurian locations.
Much action and adventure ensues.

The authors keep the story unfolding at a good clip, and if some of the twists will come as no surprise to old readers of the genre, the development is still intriguing, and different enough to keep us reading.
Which is exactly what we are looking for, in the end – a story that hooks us and does not let us go. At least, that’s what I am looking for, most of the time.
In this sense, while not world-changing (but I doubt the authors’ purpose was changing the world), Varla of Valkarth is a good way to spend two evenings.
I’ll be waiting for more. 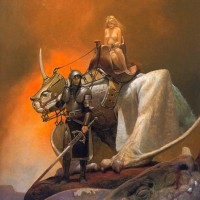