People are striking all over the planet to attract the attention of the governments on the current climate crisis.
In the beautiful hills of Astigianistan Autumn is coming, painting copper and brown the slopes and the valleys, and here I am, lucky bastard that I am, breathing the poisonous fumes escaping from the neighbor’s chimney, because when September comes, they start burning their waste – plastic included – in the home fireplace.

My mother called the environmental service because of this problem, back in, I think, 1989. The guy at the other end of the line asked her if the smoke she was seeing was white or black, because if it was not black they couldn’t do anything.
My mother, a long-time asthmatic, ripped the guy to shreds, along the lines of “what the f*ck do I know about the color, we are chocking here you a-hole!”
Nothing was done about it.
Thirty years on, they are still doing it.
At least it0’s a sign that dioxin won’t kill you that fast.
And then what do I know? I’m a bloody foreigner, I’ve been living in this place only ten years.
My mother was a bloody foreigner too, and a stuck-up meddler – she was told so by the neighbour, who somehow had learned about my mother’s complaint and report.
My mother would never come back to this place in the following years, much to my father’s irritation.

I can’t go on environmental strike here, because basically this is a ghost town peopled of dead people – only some of them have not realized yet.
What could I do, stand alone with a placard in front off the only shop in town?
But if you can, help the kids that are striking.
Because the smell of burned plastic shouldn’t be the smell that reminds you of your mother.

2 thoughts on “Breathing plastic fumes or going on strike” 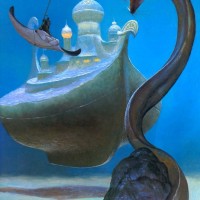