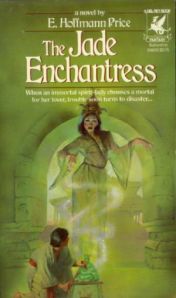 As I explained a few days back, I set myself a series of rewards for completing various chunks of my story – sort of a bait to force me pour more words on the page.
It’s easy, innocuous, inexpensive – and it seems to work.

Having reached the 50.000 word mark, I awarded myself an ebook – the Wildside Press ebook edition of E. Hoffmann Price‘s The Jade Enchantress.
The book was originally published by Balantine/Del Rey (and you see the cover here on the right).

Of the various Weird Tales/Lovecraft Circle authors I read through the years, E. Hoffmann Price is, together with Henry Kuttner, one of my favorites.
His biography from the back of one of his paperback novels is absolutely outrageous…

E. Hoffman Price (1898-present) soldiered in the Philippines and France during World War I …
During the past sixteen years, Price has been known in San Francisco’s Chinatown as Tao Fa, the dharma name conferred by Venerable Yen Pei of Singapore, and he is mentioned in prayers every new moon and full moon in two Taoist-Buddhist temples. As a gourmet, he cooks shark fin soup, sautees beche-de-mer with black mushrooms, and steams “tea-smoked” duck. He declares that in addition to silk, gunpowder, and the magnetic compass, beautiful women were invented in China. Doubters are invited to meet him at dawn, on horse or afoot, with sword or pistol.

A recipient of the World Fantasy Award for Life Achievement, Hoffmann Price was an amateur Orientalist – something that strikes a chord with me. He was a Buddhist and a Republican – strange mix. He collected oriental rugs.
He was also a former military man and something of a “soldier of fortune” (at least according to his friend Jack Williamson).
He not only published for Weird Tales, but also on Magic Carpet, and a number of other pulps – and he also worked as agent for a number of his pulp colleagues. 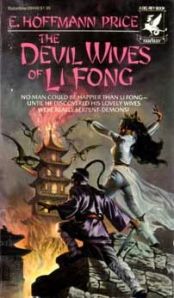 The Jade Enchantress (1982) is one of two fantasy novels Hoffman Price published when he was eighty, the other being The Devil Wives of Li Fong (1979).
The Devil Wives is a reworking of the classical Chinese legend of Madame White Snake (which is also the basis for Tsui Hark’s excellent movie, Green Snake). It features two gorgeous demon-ladies, the naive Li Fong of the title, taoist monster Hunters, a Buddhist monk… perfect!

I greatly enjoyed The Devil Wives, and thus it seemed like a good idea finally completing the series. And the steady progress of my work was certainly a good excuse.
Also, reading E. Hoffman Price counts as research – after all his are oriental fantasies.

Oh, and in case you’re curious, here’s a story by E. Hoffman Price, courtesy of Weird Tales, Issue 31, via the Wikisource archive.